Rabbi Kornsgold has been the spiritual leader of  Beth El Synagogue since 1994. He is dynamic and filled with boundless energy.  His sermons consistently inspire and educate in a warm and welcoming manner.

Rabbi Kornsgold provides leadership consistent with the tenets of Conservative Judaism.  He is a natural teacher, always willing to listen and share ideas.  And he is hightly regarded by our congregation for his caring and compassionate nature, whether it is the youngest or the oldest member of the synagogue.

It is special when an entire congregation can so readily communicate and feel such warmth with their rabbi, and we welcome you to visit us for a service so we can introduce him to you.  As busy as he is, he somehow manages to make every person in the congregation feel like a friend.

He is on the Committee on Religious Ministries at the University Medical Center of Princeton at Plainsboro and the Board of Trustees of the Central Jersey Chapter of the American Jewish Committee.

Rabbi Kornsgold is also the Immediate Past President of the Board of Rabbis of Princeton Mercer Bucks and a Past President of the Windsor-Highstown Area Ministerium (which promotes inter-faith communication).  He served for four years as the Spiritual Advisor to the Northern New Jersey Region of the Federation of Jewish Men's Clubs and was a member of the Board of Directors of Abrams Hebrew Academy, the Advisory Board of the Albert A. List College of Jewish Studies at The Jewish Theological Seminary of America and the Board of Directors of the Center for Jewish Life at Princeton University.

Rabbi Kornsgold received his Rabbinic Ordination, his Master of Arts and Bachelor's Degrees from The Jewish Theological Seminary of America.  He also received a Bachelor of Arts Degree in Political Science from Columbia University.

Prior to coming to Beth El, Rabbi Kornsgold served at Congregation Shaare Zedek in New York City, both as a student and later after he was ordained.  During his Rabbinical studies, he also served as a hospital chaplain at New York Hospital - Cornell Medical Center.  Before deciding to become a Rabbi, he also interned for the Mayor of Philadelphia.

Rabbi Kornsgold is married to Leslie Ann Kornsgold and they have three children: Noam Ezra, Yona Aryeh and Yaffa Sima as well as a dog, Aviva Austin. The rabbi was born and raised in Philadelphia and is an avid Philadelphia sports fan.

Melissa Rogers, Special Assistant to the President and Executive Director of the White House Office of Faith-based and Neighborhood Partnerships

Melissa Rogers serves as Special Assistant to the President and Executive Director of the White House Office of Faith-based and Neighborhood Partnerships. Rogers formerly served as Director of the Center for Religion and Public Affairs at Wake Forest University Divinity School and as a nonresident Senior Fellow in the Governance Studies program of The Brookings Institution. Prior to her time with Wake Forest University and Brookings, Rogers was the Executive Director of the Pew Forum on Religion and Public Life and General Counsel of the Baptist Joint Committee for Religious Liberty. In 2008 Baylor University Press published a casebook co-authored by Rogers, Religious Freedom and the Supreme Court. In 2009 President Barack Obama appointed Rogers to serve as Chair of his inaugural Advisory Council on Faith-Based and Neighborhood Partnerships. In 2011 she was named to a subgroup of the State Department’s Religion and Foreign Policy Working Group. Rogers has testified before subcommittees of the U.S. Senate and House Judiciary Committees. She earned her law degree from the University of Pennsylvania Law School and graduated Phi Beta Kappa from Baylor University.

Jared Feldman is the Vice President and Washington Director for the Jewish Council for Public Affairs in Washington, DC.   He leads the JCPA's federal government relations, strategic communications efforts, and Confronting Poverty program.  Jared specializes in Civil Rights, Civil Liberties, and Church-State Issues and has previously worked with the United States Department of Justice on federal civil rights policy and strategy.  Prior to joining to JCPA, Jared lived in California where he was engaged in many public polices issues including the State's Stem Cell Research Initiative, research policy, and funding for higher education.  Jared is a graduate of the University of California-San Diego, where he majored in Economics, and is earning a law degree from the George Washington University Law School, where is both a George Washington and Thurgood Marshall Scholar.  He holds a Masters in Government with an emphasis in Law and Justice Policy from Johns Hopkins University.  His thesis is on Congressional National Security Power.

Rabbi Steve Gutow is President and CEO of the Jewish Council for Public Affairs. He is a lawyer, rabbi, and political organizer.

Steve has worked in his present position to protect the security of Israel, to move the Jewish community and the US government to end genocide in Darfur, restore civility in public life, fight poverty, and create a sustainable environment. He has been named to the “Forward 50” and Newsweek/Daily Beast list of most influential rabbis three times since 2008.

Steve developed strong relationships with key Israeli officials, built bridges with significant interfaith  leaders and played a central role in combating the delegitimization of Israel. In 2010, he was deeply engaged in the creation of the Israel Action Network, a combined project of Jewish Council for Public Affairs and Jewish Federations of North America.

Since coming to JCPA in 2006, he has focused on enhancing the JCPA’s interfaith relations. Steve has built important associations with the leadership of the National Council of Churches, Catholic Charities and the Islamic Society of North America. He has participated in interfaith missions to Vietnam, Israel, Jordan and Indonesia. In May 2012, he served as scholar in residence on a trip led by the Baltimore Jewish Council bringing local rabbis, ministers and imams to Israel and the Palestinian territories.

Steve helped lead the Fighting Poverty with Faith national interfaith mobilizations over the past 7 years. He also helped lead annual anti-hunger Seder events at the U.S. Capitol since 2009. In October 2012, Steve took the JCPA Food Stamp Challenge for the third time during his tenure. He lived on $31.50 for one week, the current federal allotment to the average food stamp recipient and blogged on his experience in the Huffington Post. His effort was also mentioned in editorials in the Forward and the NY Jewish Week.

In December 2012, moved by the tragic school shooting in Newtown, CT, Rabbi Gutow spearheaded the Zichronam Livracha campaign for a comprehensive approach to end gun violence, comprising grassroots advocacy, outreach to government officials, and a petition at www.EndGunViolenceNow.org that attracted thousands of signatures in just a few days.

He is a member of the State Department Working Group on Religion and Foreign Policy. He chaired United to End Genocide from 2006-2007. Steve is a JCPA representative to the Jewish Social Justice Roundtable, and serves on the board of the National Religious Partnership for the Environment. Steve was the first southwest regional director for AIPAC and founding executive director of the National Jewish Democratic Council. Steve has held lay leadership roles for the American Jewish Congress, the Texas Civil Liberties Union, and many other Jewish and general community organizations. 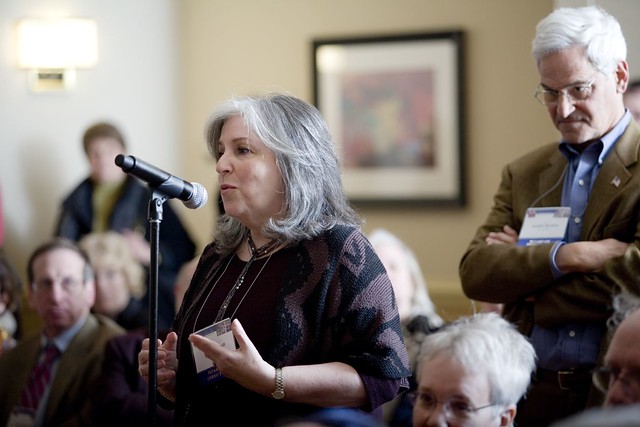 Susan W. Turnbull,  a resident of Bethesda, Maryland, is a life-long community activist who is involved with a myriad of social justice activities.  The Chair of the Jewish Council for Public Affairs, she served as  Chair of Jewish Women International from 2009-2013 and has been an Member of the Council of Presidents of Major American Jewish Organizations  since 2009.

Ms. Turnbull was a Member, Hillel: The Foundation for Jewish Campus Life Board of Directors from 2008-2012. On behalf of Hillel, she was the featured speaker at numerous Campus Hillel communities across the country on political activism 2004-2008.

Ms. Turnbull was an Officer and Board Member of the  Jewish Social Service Agency of Washington, DC Board of Directors 1984-2012. Currently, Ms. Turnbull serves on the Board of the University of Maryland Institute for Citizenship and Politics and the Board of the Jewish Community Relations Council of Greater Washington, D.C. From 1992 -2011,  Ms. Turnbull was a Member of the Democratic National Committee serving as Vice Chair from 2005-2009 and Deputy Chair from 2003-2005 .  Previously she was the Chair of both the DNC Women’s Caucus and DNC Women’s Leadership Forum.  From 2009-2011 Ms. Turnbull Chaired the Maryland Democratic Party and led the Maryland Democrats to an overwhelming reelection victory for Governor Martin O’Malley and Senator Barbara Mikulski. During her tenure on the DNC, Ms. Turnbull was a regular political commentator on MSNBC and Fox News from 1998-2010 and was also a guest on over 500 radio shows during this period. She was a principal speaker at events in more than 35 states and several foreign countries on behalf of the Democratic National Committee and three Presidential campaigns.

A graduate of the University of Maryland with a M.S. in Urban Studies, the University of Cincinnati with a B.S. in Community Services and Urban Affairs  and Marymount University with a B.A. in Interior Design, since 2007, Ms. Turnbull has compiled a grants information newsletter for  several Members of Congress that is distributed to their constituents every month.  She previously served as the Chair of the Montgomery County Maryland Board of Zoning Appeals, a  senior level Congressional staffer and Washington Representative for a consortium of governmental agencies from Toledo, Ohio.

A mother of two adult sons, Ms. Turnbull who lives in Bethesda, Maryland with her husband Bruce H. Turnbull, a practicing attorney.  Ms. Turnbull has, after years of a successful practice in commercial space planning and interior and graphic design, recently begun designing silver jewelry at Silverworks at Glen Echo Park in Maryland.