Clinton: Israel and U.S. are on the 'same page' regarding Iran 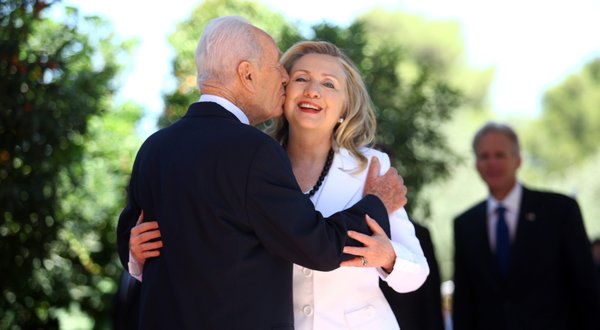 JERUSALEM — Visiting Israel for the first time in nearly two years, with the Palestinian peace process seemingly on perpetual hold, Secretary of State Hillary Rodham Clinton said Monday that “the status quo is unsustainable” and urged leaders from both sides back to negotiations.

Mrs. Clinton said she had warned Israeli and Palestinian leaders against efforts in “international venues” — code for the Palestinians’ plans to seek elevated status from the United Nations — or “unilateral actions,” such as Israel’s annexing parts of the West Bank or withdrawing from others, essentially pre-defining the borders of a future Palestinian state.

“We remain focused on the resumption of direct negotiations, since we believe that is the only route to a lasting stable peace,” she said at a late-night news conference here after a 14-hour marathon of meetings. “To those who say the timing isn’t right, or the trust just isn’t there, I say peace won’t wait, and the responsibility is on all of us.”

Her visit, which capped a grueling 13-day, nine-country tour, was part of a parade of top United States officials through the Israeli capital this month intended to underline what Mrs. Clinton described as “almost daily” coordination on security issues between the countries. Coming on the heels of her meeting with the new Islamist president of Egypt, and amid what she repeatedly called “unprecedented change” in the Middle East, many of the meetings focused on Egypt’s precarious treaty with Israel as well as Iran’s nuclear program.

Many analysts here saw a political agenda wrapped inside the diplomacy. Mitt Romney, the presumptive Republican presidential nominee who has pledged to do “the opposite” of the Obama administration when it comes to Israel, is scheduled to visit here in two weeks, hoping to peel off Jewish-American votes and shore up support among evangelical Christians. Mrs. Clinton’s visit could help blunt criticism that President Obama has not been to Israel since his election and that he seems to have lost interest in the peace process after failed efforts to stop Israel’s expansion of settlements in the West Bank territories it captured in the 1967 Arab-Israeli war.

“Why now? The answer is elections,” observed Eytan Gilboa, a politics professor at Bar-Ilan University. “Hillary Clinton is very popular in Israel. There were talks about Obama coming here — I think he did very well to avoid a visit by himself. It was a great idea to send her to do some politicking for him.”
Welcoming Mrs. Clinton to dinner at his Jerusalem office, Prime Minister Benjamin Netanyahu described the Palestinians as “an anchor of peace,” saying, “We have to invest every effort to maintain it, to keep the tranquillity and see if we can move the process forward.” But first on the agenda, Mr. Netanyahu said, was the 30-year-old peace treaty with Egypt.

Later, at her news conference, Mrs. Clinton said: “The United States, Israel, and Egypt all share a strong interest in the treaty. It has served as the backbone for regional stability for more than three decades.”
Even as Mrs. Clinton was pushing for peace, The Associated Press reported that four Palestinian journalists trying to cover her news conference left the hotel where it was taking place after being asked to drop their pants for an Israeli security check; Israeli and international journalists were not subjected to such requests.
Earlier in the day, Mrs. Clinton met with Defense Minister Ehud Barak, Foreign Minister Avigdor Lieberman and President Shimon Peres of Israel, as well as with Prime Minister Salam Fayyad of the Palestinian Authority and Tony Blair, the former British prime minister who now serves as the representative of the quartet — Russia, the United States, the European Union and the United Nations — on the peace process.

Mr. Netanyahu, Mr. Peres and Mrs. Clinton all took pains to emphasize that Israel and the United States were closely aligned, particularly on Iran, where there have been some fissures between their countries over the past six months regarding the timetable for sanctions and diplomacy versus a potential military strike.

“We all prefer a diplomatic resolution, and Iran’s leaders still have the opportunity to make the right decision,” Mrs. Clinton said. “The choice is ultimately Iran’s to make. Our own choice is clear: we will use all elements of American power to prevent Iran from obtaining a nuclear weapon.” Iran has continued to deny that it has any intention of building a nuclear weapon.

Asked what the chances were that Israel would attack unilaterally, Mrs. Clinton demurred, saying, “It’s absolutely fair to say we are on the same page at this moment trying to figure our way forward to have the maximum impact on the decisions that Iran makes.”

But Zalman Shoval, a former ambassador to the United States who remains an adviser to Mr. Netanyahu, said that while Israeli officials have largely been quiet in recent weeks, there is “increasing worry” over the diplomatic efforts.

“Time is running out,” Mr. Shoval said in an interview. “This will be made very clear by Israel, maybe not publicly but certainly inside the meetings, and that Israel must keep its own options also on the table although we still hope that the United States will take the lead.”

After having tomatoes thrown at her motorcade in Egypt, Mrs. Clinton was greeted at Mr. Peres’s residence by protesters calling on the United States to free Jonathan Pollard, a former American intelligence officer convicted of spying on Israel’s behalf. Asked about the chances of his release, the secretary noted that Mr. Pollard is serving a life sentence. “I do not have any expectation that that is going to change,” she said.

There are currently no comments for this entry